My cardiologist said my surgeon recommends waiting 6 months after surgery for any dental work. Made it! Phew!

It was pretty magical. The extraction only took about 10 minutes from when I sat down in the chair to when the tooth was out.

It doesn’t hurt much, which is great. The biggest bummer is that I could only have liquids yesterday and now, only soft foods for the next week. No popcorn? Nuts, chips, and such. All my favorites. (I even just bought a pound of mixed nuts with a nut cracker as a Christmas tradition from my youth!)

Oh well. At least the tooth is out. And my oral surgeon said upper wisdom teeth are less likely to get dry socket because of the way the vascular system is positioned in the mouth.

Hooray! That was an annoying 4 weeks. Glad it’s in the past.

I had surgery on May 31st. I guess because November 31st doesn’t exist, that makes today 6 months post op. How is that even possible?!?!

Just yesterday, I finally looked at the couple of pictures JJ took of me when I was in the ICU, still asleep. It was a little emotional. Kind of made me sick to my stomach to see all the tubes and buttons and wires and things. However, I’m glad he took them and I was finally able to see them. (I won’t be sharing them here. Sorry – too personal.)

I will share one story from the ICU. When I started waking up, they wanted to know if I was awake enough to have the breathing tube removed. Of course, it was impossible to talk (since I had a tube down  my throat), so I motioned with my hand for a pen. Also – not easy to do because I was tied to the bed. Some patients start ripping out wires and stuff because they aren’t thinking straight on all the medicine. At first JJ handed me a pen – which was so frustrating because he stuck it in my left hand. I could not simply just move and set it in my right hand, as I’m right handed. When they finally got it all figured out, I wrote them a note. To Paraphrase:

“On one hand, I would really like this tube out so I can speak. On the other hand, I do feel really sleepy still.” [Insert them asking me if they can untie me or if I was going to start pulling out the IVs] “My brother had an aneurysm. He did that. I will not.”

So there you go. Drugged up Debra still thinks fairly clear – however – the nurses, then the anesthesiologist, and later my surgeon thought it was hilarious. The anesthesiologist and the surgeon both asked to take a photo of my note. Apparently, in 30 years of work, no one had written one before. Which I found shocking. But then again, I was at a children’s hospital. Many of their patients can hardly read, let alone write.

Other than my hypothesis that my heart is smaller, therefore more efficient, therefore better circulation, therefore my wisdom tooth came in, everything is dandy. But seriously, my tooth (which I didn’t even know I had until my pre-op dental clearance appointment in the spring) came in and it came in quick. In the spring I was told “It may come in, in a year, in several, maybe never.”  When I went to the oral surgeon at the end of October, one little edge had cut through the gum. They said “Oh – At your age? It will probably be a very slow eruption. It could sit right there for years and make hardly any progress at all.” UHM!!! 4 weeks later the entire tooth has come in. It does make my face hurt a bit but – hey – it’s not heart surgery so I can’t complain too much. I’m having it pulled on December 8th. Can’t wait. I’m tired of trying to brush it way back there.

Beyond health stuff are enjoying the Advent season. We decorated and turned on the music the day after Thanksgiving. I have a few fun things planned for the boys, baking and such.

I’ll leave you with a picture of our Christmas tree and nativity. 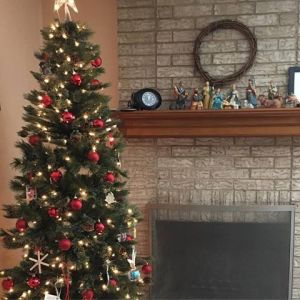 We’ve made it one month. 🙂 We are quite enjoying this new phase of life and adventure of being married.

As we head into the Christmas week (which has completely snuck up on us!) we are continuing to putts around the house, organizing, throwing things out, combining, cleaning, and getting settled into our Home.

We are also wrapping up loose ends on wedding things, like pictures and thank you notes (I addressed 135 envelopes today.) I get the week between Christmas and new years off, so hopefully those extra days will help us get a little more accomplished, but also have some time of rest.

Other than that – I’ve finally picked up War & Peace again. See 5 years ago… or again 3 years ago… This time I am already 150 pages in (about 1 / 10 of the way through) and I am finding it quite enjoyable.

With the holiday’s that means less time at work, More time to READ!

I finally read the Silmarillion by J.R.R. Tolkien. I have wanted to read this book for the last 5 years or so. I started it last January, but did not get very far before life got in the way. So I started over this weekend and read the entire thing. It’s so beautiful! And what a great backdrop to better understand the world of Middle Earth. Thanks Vicky for reminding me that I wanted/needed to read this.

(for those who have read the Silmarillion – Check out the Children of Hurin. It’s a full book in greater detail of just a portion of the Silmarillion. The story of Túrin Turambar, and his sister Nienor Níniel.)

Next up: The Odyssey.

Hope everyone has a wonderful Christmas. We just finished opening gifts and we tried something new this year: Online video conferencing for all the family members.

I received some nice puzzles, great clothes, a Christmas towel to decorate my kitchen, a bath set and a gift certificate for itunes. I can’t wait to pick out more music to listen to….perhaps some more Death Cab for Cutie!?!?

I have been hanging out at Lance & Katie’s so it was really fun to see the excitement in the girls eyes last night waiting for Santa. And then again this morning as Santa left them a gift and ate the cookies they left out.

So now it’s time for naps before the yummy christmas meal.

Are you kidding me?

I just drove home from work. I turned the radio on. The “Peanuts’ Christmas” song came on the radio.

And its still 2 weeks until Thanksgiving!?!?!? Good thing I like Christmas music. Did you know that Michael W. Smith has a new Christmas CD out? Tim was telling me about it. I LOVE MWS’s other Christmas cds, so I must get a copy of this one.

Other than that, Life finally settling down a bit. This week I have an little bit of a lighter class load (my tues/thurs class I only have to go to on Thursday for a thirty minute meeting and my 3 hour Thursday night class in meeting for a slightly shorter time period this week). Plus I do not have any major deadlines this week. I have a little assignment that I need to finish tonight, but it is doable.

So yeah, nice to finally breath a little easier.

Man…it is getting windy out there. I best go run my errands before it gets too cold and too dark.

It is not yet “tomorrow” here on the west coast (though this post will likely show as being a 1-4-07 post). Tomorrow I head home. It has been a nice visit. Very low key, which is a nice contrast to last semester and the up and coming one.

It is kind of odd this time around because when I moved in August, I kind of figured I would visit WA state for christmas. Now I will probably not be back until July (for my brother’s wedding). That is seven months away! Perhaps by that time I will need a break from the Illinois heat and humidity. Hey…it will be summer…I should try and go to an M’s game….

Alright…Bring on the school work! On Friday, I am buying all my books. class starts monday and “We’re Off!”

The family just finished opening all of our gifts! (Yes, we realize it is only the 23rd) In order to have everyone present, and avoid the business of tomorrow being Sunday, we opted to open gifts tonight.

The last week has been very relaxing. A bit of book reading (fun books), listening to music, hanging out with my nieces, watching movies, and sleeping. (oh, and just took a break from blogging to dance with the neices to Audio A “Big House”)

After Class this morning, I will only have:
one more class to attend
one more book to read
one more paper to write
and one final to take.

Lets see…only 10 days until I get to go home for Chirstmas. That’s pretty sweet as well.