We’ve been on the down low lately because on March 21st, I got hit with the stomach bug. Not only did I lose 4-5 pounds(!), but it triggered a migraine.

JJ had to leave his work early (it was only his 2nd week there!) because I just couldn’t take care of the kids. And of course, 48 hours after I got it, little E got it and JJ 48 hours after that. It’s a miracle Z escaped it all together!

Sweet baby boy had it linger around for almost 2 weeks. After a few days, we would think he was ok and then he would throw up again, 3 days fine, then not, 2 days fine, and then not, etc.  And even at the very end, apparently his little tummy shrunk while he was sick so he was back to his cheerful self – and we accidentally overfilled him. Add to all of that, he was temporally lactose intolerant so we had to switch his formula. YUCK!

It was just a two-week period that I’m so thankful we are through. Everyone is finally back to normal.

Speaking of little E, it brings me to both my current praise and prayer request.

When E was about 1 month old, we, along with his pediatrician, determined that he was cow protein intolerant. After a lot of thought and prayer, we decided to stop nursing him and switch over to a specialized formula. Within 48 hours he was practically a different baby! While we were really thankful, any momma out there that goes from nursing to full stop knows how difficult that can be. It’s both emotionally hard (momma guilt!) and physically painful. However – after a couple of weeks of a much happier, healthier home, we were so glad with our decision.

Here’s where the praise comes in. Little did we know at the time (October) that we were headed toward heart surgery. Can I just say I am so thankful for discernment and wisdom back then?! I cannot even imagine trying to stop nursing because I have heart surgery coming up.  WOW. I’m so thankful I don’t have to deal with the emotional (and painful) choice right now. It is so wonderful to be able to look backwards just to October and see how even then, God was directing us, helping us make difficult decisions that would ultimately help ease our way to heart surgery.

Related to all of the above – we are really hoping and praying E will be sleeping through the night by the end of May. Both for the ease of those taking care of the boys while I’m in the hospital and for us when we get back home and are in the middle of a long recovery road. Honestly, with Z, he was a big baby and I’m pretty sure he was sleeping through the night when he was 3 months old. E is a different story. A month ago, we assumed he would be there by 9 months old, but the stomach bug set us back.

During the stomach bug we took him to the doctor and he weighed in at the 15 percentile range. Basically, right now at 7 months, E weights 16.5 lbs. Z weighed this somewhere around 3 months old. They could not be more different in body type. Between trying to get on track post-stomach bug, restarting solids, and thinking E’s in the middle of a growth spurt, he wakes up at least 2 times a night right now.  (He was down to 1 most nights, and sometimes none.)

Like most things, it’s small by itself, but it’s big to us right now. No matter the case, we trust God will provide. Either though E sleeping through the night, or endurance for those looking after him.

I went home and everything went ok. I healed and I grew.

A few months after I turned two, my doctors decided it was time for my next surgery. The two surgeries I had when I was an infant were obviously helpful and prolonged my life, but I needed a solution that would grow with me and take me into adulthood.

In addition, there was a small hole that needed to be addressed. In February of 1983, the hole was pin-size and I was showing no symptoms. By the time I had surgery in April, it had grown to be the size of the doctor’s finger nail. WOW! Even though I had not shown symptoms, I would have soon, had they not addressed it.

And so, on April 11, 1983, I had my first and only open heart surgery.[*] The two main objectives were to close up the hole that shouldn’t be there, and to add structure to the valve space that was still just a “hole” they made in my second surgery. I don’t know the technical name of what they did or what material they used to shore-up the valve space – but it worked!

The following are some pictures from that surgery.

Hanging out at the children’s hospital. I remember those animals! Or… at least I think I do. It’s possible I’ve just seen this photo enough times that I think I remember them. 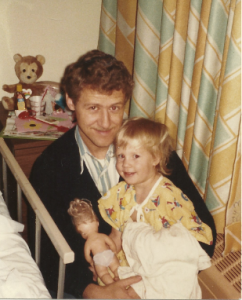 My dad and I before surgery. I DO claim this as one of my first memories. I have a clear picture in my mind of that dresser with gifts people gave me. I know it’s a real memory because in my mind’s eye, I’m looking at it from a different angle.

Clearly, post-op. This one makes me want to cry. I have always been so thankful I remember none of the physical pain.

This is one of my favorite photos of all time. It’s from the day I got home.

Another photo of me after I went home. I’m surrounded by all of the gifts I received. And clearly, MOM, that big bird puzzle you have for the grand children to play with is mine. I have photo evidence. 😉

I’m so thankful I don’t remember much from this and it’s really nice when talking to people about my heart that I can say “my most recent heart surgery was 1983.” A lot of babies born with Congenital Heart Defects (CHD) have many more surgery thank I have.

This surgery is also where I get the date for “Happy to Be Alive Day” – which is basically my own made up holiday.

Something that is very important in all of this is that even though it’s been decades since I had heart surgery, this was not a “cure.” There is no cure for CHD. This is a life long health condition that affects everyday life.

Stop by again soon. My next post will be some heart related stories from my childhood years and maybe even Jr. High. I’m still deciding on what pictures to post. You know that “awkward phase” we all go through – I’ll probably put up one or two. 🙂

[*] Open heart surgery is any surgery in which the chest is opened and surgery is done on the heart muscle, valves, arteries, or other parts of the heart (such as the aorta). The term “open” means that the chest is “cut” open. This definition along with additional information can be found at the US National Library of Medicine website.

Filed under cardiology, happy to be alive